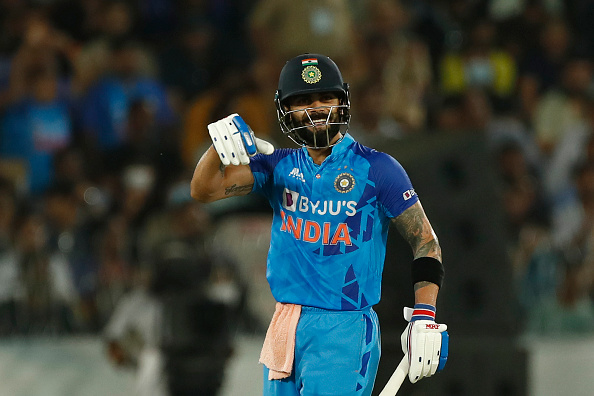 Virat Kohli’s last century came on September 8, 2022, against Afghanistan at the Dubai International Stadium in the first innings. This was Virat Kohli’s first-ever T20I century, bringing up his 71st international century after 989 days. While form is transient and class is forever, Kohli’s persistent bad form was a concern with the sky exchange T20I World Cup 2022 rapidly approaching.

Virat Kohli, the ICC Men’s Player of the Decade, had previously gone 53 innings without a century in international cricket – 32 Test innings and 21 ODI innings. While Kohli still averages 49.95 in Tests and 58.07 in ODIs, going 53 innings without a century is a poor showing for a player who was expected to break Sachin Tendulkar’s record of 100 centuries across all forms.

When Virat Kohli got his final Test century in 2019, India had complete dominance over Bangladesh. The Bangla Tigers were on tour in India, and the Eden Gardens hosted India’s first day-night pink-ball Test match. After bowling out the visitors for 106 runs in the first innings, India reached a whopping 347 before declaring.

A formalised Kohli was the only centurion for the hosts that day, with half-centuries from Cheteshwar Pujara and Ajikya Rahane. Kohli’s 27th Test international century was not a typical Test tonne, as he blasted 18 boundaries. He was eventually bowled by Ebadot Hossain, with the batsman unaware that it would be his last international century for a very long time. Kohli has three half-centuries since then, but he has yet to hit the elusive three-figure mark.

Virat Kohli, the most flawless ODI batsman the game has ever produced, has suffered in his favourite version of the game as well. Kohli’s most recent ODI century came on August 14, 2019, during India’s tour of the West Indies. While chasing 241 runs on foreign soil, Virat Kohli delivered a magnificent knock. With Rohit Sharma, Shikhar Dhawan, and Rishabh Pant all failing to change gears, Kohli and Shreyas Iyer were tasked with winning the game for India.

It was Virat Kohli’s second consecutive century in the series, as well as his final century in the 50-over format. No one expected Kohli, who had previously scored centuries for fun, to suffer. Since then, King Kohli has scored 85, 78, 89, and more, but he has yet to reach his 44th ODI century.

Bad form has plagued India’s top batsmen, including Sachin Tendulkar and Sunil Gavaskar, over their careers. A guy who has 43 ODI hundreds in 251 innings cannot be blamed for a lack of form, as Gavaskar correctly points out.

“He’s been scoring a lot more than I did in those three years.” Every other game, he averages a half-century or a score of 70-80. He will not receive the hundred. So you can’t accuse him of being out of touch.

Virat Kohli scored his first T20I century on September 8, 2022, against Afghanistan at the Dubai International Stadium. After nearly three years, he finally got the ton.

The Royal Challengers Bangalore were hosting the Kolkata Knight Riders at the M. Chinnaswamy Stadium, and the former India captain batted first for this squad. His 58-ball-100 from the starting position contributed to RCB scoring 213 runs. Visitors KKR came close to catching it, but fell short by only 10 runs.

Virat Kohli’s last Test century occurred on November 22, 2019, when he hit 139 against Bangladesh at Eden Gardens. That match was won by India by an innings and 46 runs.

What is India’s century winning percentage under Virat Kohli?

India’s century-winning percentage under Virat Kohli is 47.92%. India has won 48 of the 71 international matches in which Kohli has scored a century.

The gaming area should also be considered in the home-away situation. It has been observed that host groups have a variety of benefits over visiting groups. Since they can collaborate with Groundkeeper and pitch the boss on more profitable field conditions for the group. The surroundings, which is the main focus of the inexperienced visiting group, is another factor to be projected. A host group is more aware of the weather and is better equipped to deal with it. Furthermore, a study of a group’s prior performance can be beneficial for you to wager.